Books from the Hatfield Library on Designing Surveys resources to help you to design: survey instruments, writing survey questions, and how to administer questionnaires

Example of using SURVEYMONKEY with 13 questions

In January 2011, Gary Klein needed to survey business librarians who work for universities in North America.  SurveyMonkey was used to create the survey instrument.  An email invitation to take the online survey was sent to the subscribers of 2 professional librarian discussion groups in which Mr. Klein was a long time active participant, and therefore his name was familiar to many of the subscribers.  Typically, when surveys were posted to these professional groups, the window of opportunity to respond was in the range of 2 to 4 weeks.

This survey consisted of 13 questions, which was beyond the limits of the free version of SurveyMonkey.

The total cost for using the expanded version of SurveyMonkey was $26 for 1 month's use, which included:

View the Brief results of this SurveyMonkey project (9 page PDF)

View the Detailed results of this SurveyMonkey project (18 page PDF)

Comparison of features between the Free versus Paid versions of SurveyMonkey.com: 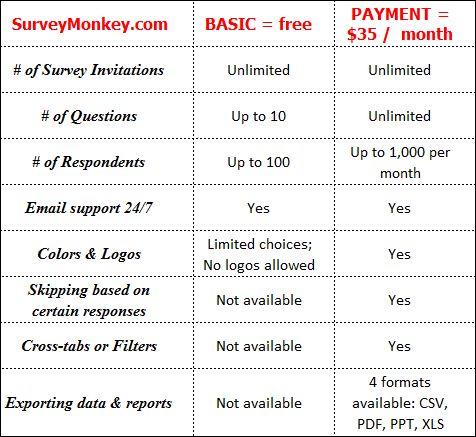 Gary Klein
Email Me
Schedule an Appointment with Gary